Cause of Wars: Militarists in Power

Review: Rise of the Vulcans by James Mann

Realize: When George W. Bush was elected as President he had no prior foreign policy experience and frequently bumbled on naming other foreign leaders.  Not only did Bush have no experience, he also did not have a basic rudimentary conception about America’s role in the world or specific foreign policy other than his campaign platitudes against “nation building.”  To strengthen that weakness, Bush sought to surround himself with a cabinet team of experienced and trusted members that he could ultimately rely on to help him forge a path.  Enter the Vulcans.  Author James Mann puts together an enthralling account of the rise of the Bush cabinet and their place in the last 30 to 40 years in contemporary history with his book Rise Of The Vulcans: The History of Bush’s War Cabinet

.
Broadly, the book is the mini biographies of Donald Rumsfeld, Dick Cheney, Colin Powell, Richard Armitage, Paul Wolfowitz, and Condoleeza Rice.  However, by detailing the careers of these people Mann also gives the reader great insight into modern foreign policy, from the Nixon era to Bush II.  The book was published in 2004 so it lacks the hindsight that we now have 6 years later with regards to the Iraq and Afghanistan wars, yet this detracts not at all from the book.  Rise Of The Vulcans: The History of Bush’s War Cabinet

, I have no doubt, will become a central reference point to any future inquisitor looking into American policy from the 1970’s on.
Many may be tempted to classify all of the subjects as neoconservatives, however one of the driving themes of the book is the role of the foreign policy realists versus the idealists (neo-cons).  Yet this was not just a battle that occurred after the collapse of the Soviet Union as some may have asserted.  Even in the midst of the Cold War, there was definite conservative in-fighting between the pragmatists, led by the Kissinger camp, and the neo-cons, who believed that America’s military might must be unchallenged.  Rumsfeld opposed Kissinger’s policy of détente and played an active role in the Ford Administration in decreasing the power and influence that Kissinger once had.
While Rumsfeld and Cheney believed mightily in American military might and hegemony, it might be hard to classify them as idealists of spreading democracy throughout the world.  However, Paul Wolfowitz meets the classic definition of neoconservative which spread from the Dixie Democrats who left the Democratic Party to join the Republicans in the Reagan Revolution.  Wolfowitz was an academic greatly admired for his intelligence.  He was highly influenced by the ideology of Leo Strauss and was also mentored by Scoop Jackson, US Senator from Washington.  Wolfowitz spent his whole career in the Defense Department and focused on policies that opposed the ideas of moral relativity or balance of power.  Instead Wolfowitz operated from a stance that Democracy and justice were grand ideas that should be spread throughout the world through the might and force of the US military.  It should also be noted that Wolfowitz had been focused on Iraq as a threat to Middle East stability long before the Middle East was on anybody’s map.
Powell and Armitage were often the counter balance to the Rumsfeld/Wolfowitz/Cheney forces, not only in Bush II but also Bush I.  Powell was also a dynamic political figure who ascended Washington’s power structure with amazing speed and was always an admired figure.  Both Powell and Armitage believed in a strong American military and were proponents of a hefty defense budget.  However, where they differed from the other cabinet members was in how the use of force should be applied.  Powell believed that if force was to be applied it must be done with the support of the public, with overwhelming force, and with a clear, communicable goal in mind.  This mindset, shared by Armitage, became known as the Powell Doctrine and was shaped by the experience of Vietnam.  The Vietnam experience made Powell and Armitage suspicious of the civilian leaders like Rumsfeld and Cheney who may recklessly damage the military and American power by engaging long term commitments with no exit plans.
Condoleeza Rice was mentored in the camp of Brent Scowcroft who was a realist.  Rice, a specialist in Russia, came to government in the first Bush Administration and made a lasting impression on everyone she worked for.  When George W. Bush was putting together a foreign policy team during his campaign, he instantly connected with Rice on a personal level and made her a central part of putting together his foreign policy.  Mann portrays Rice as somewhat amorphous, her ideas and beliefs are seemingly tied to the politics and she oftens acts as a sounding board to Bush II.  Instead of becoming a proponent of her realist background, she instead starts to reflect the President and his beliefs which were largely shaped by the dominant members of his cabinet.  In other words, Rice aimed to please, it seems, more than to persuade.
The book culminates with the decision to invade Iraq and Mann sums up that decision as a reflection of the Vulcan’s world view with four themes:
Mann makes an understated point that most historians make a clear distinction, a line in the sand, marking the end of the Cold War as the distinctive point where American foreign policy changed.  Yet, it started to occur much earlier than that with the rise of these Vulcan’s and their world view.  The end of the Cold War was merely a middle point in the chapter.  The fact that the US has mostly had Republican Presidents in the last 40 years the Vulcans have remained in power and shaped the events of modern history and to understand that story you have to understand their story.  James Mann gives a clearly written and highly detailed account of some of the most influential actors in American politics.  Rise Of The Vulcans: The History of Bush’s War Cabinet

is an utterly fascinating account and should be read by anyone seeking answers on the role of America in the world today. 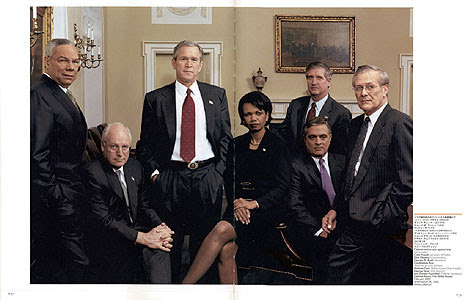