Here is the link to all the newsletters archived in the OMNI web site.

http://www.omnicenter.org/newsletter-archive/ For views and information not found in the mainstream media

Instead of Defense Department, Say War Department
Instead of War on Terror, Say US War to Dominate World
Instead of Taliban, Say Afghan Resistance to Occupation
And Afghan/Pak make sense.

Join us in for Nato Counter !
Mary Zerkel and Peter Lems, American Friends Service Committee via uark.edu to jbennet
Join us for our Counter-Summit for Peace and Economic Justice , May 18 & 19
Dear J,
The Counter Agenda!

AFSC is continuing our work to put an end to, and reprioritize, the initiatives of the pro-military agendas around the world. From various traveling exhibits like Windows and Mirrors, hosting informative events such as Know Drones, and the ongoing panels of engaging dialogue. With your help we are making a difference every day.
To expand our work with European partners to end the war in , AFSC took the lead in organizing the Network for a NATO-FREE FUTURE. With these partners, we've organized the Counter-Summit for Peace and Economic Justice Conference as an alternative and safe place for those who, like us, oppose current agendas of many world governments.
There will be more than 50 heads of state participating in the upcoming NATO Summit.
The NATO Summit's agenda aims to:
Establish support for a military presence through 2024 in .
Commit to spending billions of dollars to arm and support over-sized Afghan security forces that are unsustainable
Reaffirm NATO as a global military alliance and preparations for “New Strategic Concept” wars like the disastrous Libyan military intervention.
To push back against this agenda, the counter summit will offer plenary sessions and 28 workshops featuring analysis, trainings, and campaigns designed to bring the troops home, to move the money from the Pentagon to meet real human needs and to create a more peaceful, just and secure world.
Bringing together activists from across the and around the world, the counter-summit will provide rare and critically important opportunities to learn from one another, to network and to build more cohesive peace, economic and social justice movements.
Speakers include Phyllis Bennis, Medea Benjamin, Roger Cole, Bruce Gagnon, Sarita Gupta, and AFSC's Peter Lems.
You’ll find the conference agenda, a complete list of speakers, workshops, and other useful information regarding the conference at the NATO-FREE FUTURE web page.
A better, more peaceful, secure and prosperous world is possible. Please come to if you can!
Wage peace,
Mary Zerkel and Peter Lems
American Friends Service Committee
Ps. If you want to take action in advance visit our NATO/G8 Resources page. http://www.afsc.org/resource/natog8-resources
Forward this message to your friends.

Give Afghan women a voice!
Karen Jacob peace@wand.org via uark.edu
April 11, 2012   to jbennet
Dear WAND Supporter,
Rangina Hamidi is a 35-year-old Afghani woman whose family fled to the during the Soviet occupation in 1981. With the threat of the Taliban’s return to power and activity in , fear is in the air - especially for women.
Susan Shaer (WAND executive director) and I met with Rangina a few weeks ago. Rangina asks that we tell members of Congress that women’s needs are fundamental to the freedom and security of families, tribes and communities.
Hillary Clinton has lifted up the absolute necessity of having women at the tables of peacemaking in , and everywhere. Yet few congresswomen are aware of President Obama’s National Action Plan on Women, Peace and Security released in December, 2011, and how it can affect plans for providing security for the women of after we leave.

troops will leave soon, so I, you, we, feel urgency to protect the citizens, the women and children, the old and infirm, from endless tragedy. You can help tell Congress to consider how to protect them. WAND has the expertise to help these groups educate elected leaders. WAND understands what policy makers need to think about on the road ahead.

You and I are the fortunate ones. We can help the Afghan women secure a better future. Join me as I work with WAND to make this a better world for all women. Starting with . You can make a difference by donating to WAND Education Fund today.

We at Cindy Sheehan's Soapbox have been a consistent, loud, and uncompromising voice for peace during the Obama administration.

More people (US troops and Afghans, alike) have died in since Obama took over management of that war.

This Sunday, on the Soapbox, I talk to , from Afghans for Peace. Afghans must, themselves, lead any effort for peace in that region.

Here is the video that wanted us to watch that highlights the struggle for integrity of vision and principle even within her own community.

You can listen to this show Sunday, March 25, at 2pm Pacific at Community Progressive Radio---or any time thereafter at Cindy Sheehan's Soapbox Archives.   http://cindysheehanssoapbox.blogspot.com/p/soapbox-archives.html

“Chris Hedges | Murder Is Not an Anomaly in War”
TruthDig, March 19, 2012
Excerpt: "Robert Bales, a U.S. Army staff sergeant who allegedly killed 16 civilians in two Afghan villages, including nine children, is not an anomaly. To decry the butchery of this case and to defend the wars of occupation we wage is to know nothing about combat."
READ MORE   http://readersupportednews.org/opinion2/266-32/10532-focus-murder-is-not-an-anomaly-in-war

Photos of Soldiers With Afghan Corpses the Latest Outrage for Occupation of
Amy Goodman and Juan Gonzalez, Video Report, Democracy Now, April 19, 2012: “We get reaction to two photographs published by the Times that show soldiers posing with the corpses and body parts of dead Afghans. ‘I think (the photos) shock us actually more than they shock Afghans,’ says journalist Anand Gopal. ‘From the Afghan perspective, we’ve had troops urinating on corpses, a massacre of 17 civilians, air strikes, night raids, troops cutting off fingers for sport, and so, for Afghans, this is part and parcel of the experience of being in war.’” READ  |  DISCUSS  |  SHARE  http://www.nationofchange.org/photos-soldiers-afghan-corpses-latest-outrage-us-occupation-afghanistan-1334853090

1.     US Labor Against the War : Index
uslaboragainstwar.org/Cached - Similar
You +1'd this publicly. Undo
Daniel Davis, an actively serving Army officer assigned to the Pentagon accuses top military officials of misleading the American public about the war in ...

MURDER IN DEFENSE OF PATRIOTISM
By Dick Bennett
Anders Behring Breivik murdered 77 people in on July 22, 2011.  Why?   He thought they were Muslims; he thought Muslims were taking over his country.   “I acted in self-defense on behalf of my people, my city, my country.”    “’I am a member of the Norwegian resistance movement….We demand that our ethnic rights not be taken away from us.”  It was a “suicide attack,” he said; he had not expected “to survive that day.”
He sounds like bin Laden:  he too was defending his faith and people.  And like the followers of bin Laden, who murdered thousands of people, Breivik was willing to give up his life.
In court Breivik argued that “he had acted in his country’s defense” and compared  himself to commanders  who authorized the bombing of and in 1945.”  On this basis he asked the court “’that I be acquitted.’”  “’As long as you call me evil, you should call the U.S. commanders during World War II evil as well when they decided to drop the bomb on Japan.’”  But the was not evil because “they tried to have noble motives to try to save people’s lives.” just as he did.   He was protesting “the ‘Islamic’ “colonization” of ,”    “’I did this out of goodness, not evil.’”  The murders were a “’preventive strike.’”
Thus “defense” because psychopathic and lethal.   To reverse the chronological order:   The U.S. Department of “Defense”. invades and bombs from in 1954 to and in 2001 and 2003, all in violation of the U.N. Charter, killing millions of innocents.   The equipped Osama bin Laden in his resistance to the Soviet Occupation.  Bin Laden ’s al Qaeda members bombed the , in defense of his faith, of , occupied now my the ,  and other Middle Eastern nations.   And  Breivik bombs and shoots in defense of “my people, my city, my country.”
Formerly a high value, the idea of “defense” has been so outrageously sullied and abused by extremist nationalistic and ethnic fanatics and xenophobes, let us banish the word until the idea loses its power to motivate mass murder.
References
--William Blum.   Killing Hope and .
--Mark Lewis and Alan Cowell (The New York Times).  “Patriotically Killed 77, Norwegian Testifies.”  ADG (April 18, 2012), 3A.

Peace has a day in Court
Cindy Sheehan 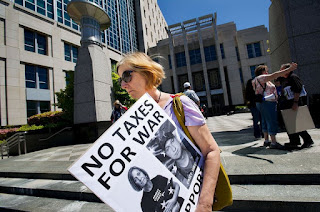 Here is the link to all OMNI newsletters:  http://www.omnicenter.org/newsletter-archive/   For a knowledge-based peace, justice, and ecology movement and an informed citizenry as the foundation for change.

Cole, Cutting Edge of US Power

The Age of American Shadow Power

Juan Cole
April 11, 2012   |    This article appeared in the April 30, 2012 edition of The Nation.
Covert operations are nothing new in American history, but it could be argued that during the past decade they have moved from being a relatively minor arrow in the national security quiver to being the cutting edge of American power. Drone strikes, electronic surveillance and stealth engagements by military units such as the Joint Special Operations Command (JSOC), as well as dependence on private corporations, mercenary armies and terrorist groups, are now arguably more common as tools of US foreign policy than conventional warfare or diplomacy. But these tools lend themselves to rogue operations that create peril for the when they blow back on us. And they often make the deeply unpopular.
Body Block - Left

Juan Cole, who maintains the blog Informed Comment, is the Richard P. Mitchell Collegiate Professor of History at the...

Also by the Author

Washington’s Iran Policy and Global Disaster (Foreign Policy, US Politics)
What history should teach us about blockading .
Juan Cole
Protest Planet: How a Neoliberal Shell Game Created an Age of Activism (Movements, Occupy Wall Street, World)
The massive popular protests that shook the globe this year have much in common, though most of the reporting on them in the mainstream media has obscured the similarities.
Juan Cole

Analysis: The rise and rise of western covert ops