please click on image to ENLARGE for wider view. 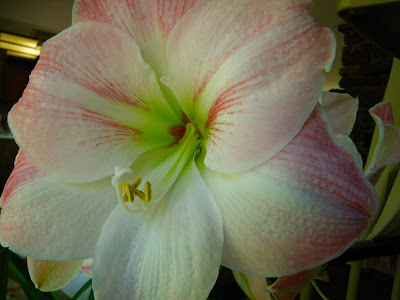 Email ThisBlogThis!Share to TwitterShare to FacebookShare to Pinterest
By aubunique - April 30, 2010 No comments:

Email ThisBlogThis!Share to TwitterShare to FacebookShare to Pinterest
By Dick Bennett - April 29, 2010 No comments:

Email ThisBlogThis!Share to TwitterShare to FacebookShare to Pinterest
Dick beenttttttt
By Dick Bennett - April 29, 2010 No comments:

Email ThisBlogThis!Share to TwitterShare to FacebookShare to Pinterest
OMNI NEWSLETTER SPECIAL NUMBER 2 ON SURVEILLANCE, 2008, for a CULTURE OF PEACE AND JUSTICE. Compiled by Dick Bennett. (#1 Jan. 28, 2008) WE, THE PEOPLE

OMNI SPECIAL NEWSLETTER ON IRAQ #7, April 29, 2010,  BUILDING A CULTURE OF PEACE TO REPLACE THE CULTURE OF WAR and EMPIRE, Dick Bennett, Editor.   (#6 March 17, 2010, # 5 June 1, 2008; #4 April 3, 2008;  #3 March 24, 2008, #2 Jan. 16, 2008, #1 Nov. 2, 2007.)
Here are the direct urls for these newsletters.   they are all listed on the newsletter archive page and fairly well marked.  http://omnicenter.org/newsletters/index.php    marc
March 17, 2010 NEWSLETTER ON IRAQ #6  http://omnicenter.org/newsletters/2010-03-17.pdf
June 1, 2008 SPECIAL ON IRAQ #5,   http://omnicenter.org/newsletters/2008-06-01_iraq-5.pdf
April 3, 2008 SPECIAL #4,FILMS ON IRAQ  http://omnicenter.org/newsletters/2008_04_03.pdf
Marck 24, 2008 #3 On Iraq  http://omnicenter.org/newsletters/2008-03-24_iraq-3.pdf
January 16, 2008 #2 On Iraq  http://omnicenter.org/newsletters/2008-01-16.pdf
Nov 2 SPECIAL NEWSLETTER: IRAQ  http://omnicenter.org/newsletters/NEWSLETTER_%20nov_2_2007.pdf
Contents
Leave Iraq
Waste, Fraud, and Abuse
Moral Corruption of US Troops by the War
Avatar and The Hurt Locker
Book on Women in Iraq Post-invasion
Contact Senators, candidates for Congress (Dem:  Whitaker, Halter)
Importance of Investigative Reporters and Editors, and Whistleblowers
Contents of Newsletter on Iraq #6
LEAVE IRAQ:  REMEMBER APRIL 9, 2003, BAGHDAD CAPTURED, OCCUPATION BEGAN
(OMNI has consistently and persistently voiced our opposition to the illegal, brutal invasion and occupation, carrying out our responsibility as informed citizens and peace and justice makers.   Let's keep it up until the killing stops, the people are fed, have clean water, and medicines, and the 4 million refugees and 2 million internally displaced are returning to their homes.)
FROM THE AMERICAN FRIENDS SERVICE COMMITTEE
Grassroots Oversight on Iraq: March 20, 2010
“Iraq War 20 March 2003 – ???  When will it end?”
Speak out for WITHDRAWAL
Dear James,
This weekend marks seven years since the invasion of Iraq in 2003.
It is a moment of tremendous sorrow as we acknowledge the absolute terror that war has brought the people of Iraq.
Millions have been forced from their homes as refugees or internally displaced; hundreds of thousands have been killed and basic services remain unattainable for many. Hundreds of thousands of US soldiers have been sent to fight resulting in over 4,000 deaths and many more injured. In addition, the war has cost U.S. taxpayers at least $3 trillion that could have been spent on jobs, healthcare, and schools. There are no winners, only lost lives and lost opportunities.
It is time to end this war now and remove U.S. troops.
Many of you are engaged with public actions to end the war this week, a march in Washington, local vigils, regional protests. Memorials are being planned to remember the lives lost and the names of the fallen will be read. But we must continue to act beyond this anniversary date. We cannot go back to our everyday lives and forget Iraq until next year. Let’s build on the momentum that Iraqis have created as they move forward to build a better future for themselves.
AFSC is urging folks to take action….
Call your member of Congress to make sure that U.S. troops are being withdrawn. The date for all combat troops to be withdrawn is only 6 months away. There are talking points posted on www.CountdowntoWithdrawal.org  AFSC's site that monitors the troop withdawal.
Thank you for helping us end the Iraq war,
Peter Lems and Mary Zerkel
For AFSC's Wage Peace Campaign team…..
American Friends Service Committee
1501 Cherry Street
Philadelphia, PA 19102
http://www.afsc.org/
THE MORAL CORRUPTION OF OUR TROOPS BY WAR  SHOOTING CIVILIANS IN BAGHDAD, IRAQ IN 2007 (Dick)

A United States military video was released this week showing the indiscriminate targeting and killing of civilians in Baghdad. The nonprofit news organization WikiLeaks obtained the video and made it available on the Internet. The video was made July 12, 2007, by a U.S. military Apache helicopter gunship, and includes audio of military radio transmissions.
Amy Goodman, Democracy Now (April 6, 2010), devoted her program to the killing of unarmed, innocent people in an incident in Baghdad on July 12,  2007.   (Google Democracy Now for the text.)  I first read about this atrocity by our airborne troops in The Good Soldiers by David Finkel.    Now the US Army’s own film of the murders is available through a whistleblower, and it shows the killers even laughing as they machine-gunned people and fired into a rescue van containing children with 30mm shells.
COVERUP (like My Lai):    WikiLeaks has released a classified US military video depicting the indiscriminate slaying of over a dozen people in the Iraqi suburb of New Baghdad -- including two Reuters news staff. Reuters has been trying to obtain the video through the Freedom of Information Act, without success since the time of the attack. The video, shot from an Apache helicopter gun-ship, clearly shows the unprovoked slaying of a wounded
Reuters employee and his rescuers. Two young children involved in the rescue
were also seriously wounded. Videos (short and long version) at
http://collateralmurder.com/
The great significance of Amy’s program is that it goes beyond one incident to reject the military’s claim that it and similar killings are aberrations.  Rather, the deliberate firing on civilians is shown to have followed SOP: Standard Operating Procedure.   But probably every opponent of the US wars already knew this, knew this about wars, and opposed them among many other reasons because they morally demoralize our own citizens, as it transforms some into killers and many more into the silently complicit (but not all: see below on Josh Stieber)..
Amy followed up on April 7 with this program:

EXCLUSIVE: One Day After 2007 Attack, Witnesses Describe US Killings of Iraqi Civilians    As the US Central Command says it has no plans to reopen an investigation into the July 2007 helicopter attack that killed a dozen people in Baghdad, including two Reuters news staff, we play never-before-seen eyewitness interviews filmed the day after the attack.


Members of OMNI understand keenly the value of truthful, fair news gathering, and we are aware of the price paid by so many journalists to provide us with the right to know, so let us publicize and participate on this important DAY. To journalists who are members of OMNI, or to any member who recognizes the value of our news reporters and editors, please volunteer to ensure OMNI's active participation every May 3. Contact Gladys Tiffany.

The theme of World Press Freedom Day on 3 May 2010 is 'Freedom of Information: The Right to Know', and UQ's conference will focus particularly on freedom of ...
www.uq.edu.au/news/index.html?article=17373 - Cached - Similar
World Press Freedom (wpfd2010) on Twitter

Climatologist to speak at 6:30 p.m. Tuesday at Rogers Public Library 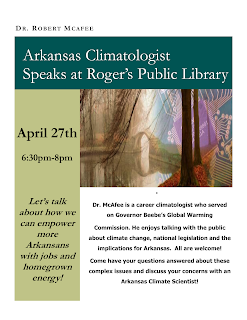 
Dr. McAfee is a career climatologist who served on Governor Beebe’s Global Warming
Commission. He enjoys talking with the public about climate change, national legislation and the implications for Arkansas.
All are welcome!
Come have your questions answered about these complex issues and discuss your concerns with an Arkansas Climate Scientist!
DR. ROBERT MCAFEE
Arkansas Climatologist
Speaks at Roger’s Public Library

Let’s talk
about how we
can empower
more
Arkansans
with jobs and
homegrown
energy!
By aubunique - April 25, 2010 No comments: