ON DVD: BATTLE FOR HADITHA 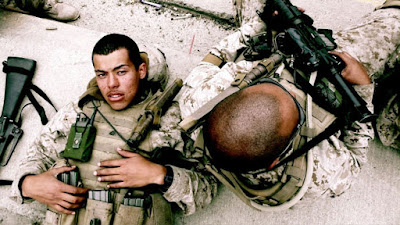 Two things immediately jump out as you watch the Iraq War docudrama Battle for Haditha: 1.) I can't believe frickin' Nick Broomfield made this, and 2.) who in the hell is this guy playing the character of Corporal Ramirez?... because he's incredible!

On that first point, I was very prematurely negative about Battle for Haditha when I first read of its production. Of the straight documentaries Broomfield made prior to Battle for Haditha, I'd seen Kurt & Courtney, Biggie and Tupac, and part of one of his Aileen Wuornos films. I found them all to be the equivalent of tabloid TV trash, and didn't think much better of their maker. I'm not the greatest fan of the documentary genre, and, to me, Broomfield was among its worst offenders. So it's no understatement to say Battle for Haditha hit me like a revelation. Broomfield's scattershot and scatterbrain attempts at finding truth in his non-fiction films play like a bunch of headless chickens bumping breasts and kicking up dirt. But apply that technique to a fictional retelling and exploration of the clusterfu*k surrounding the controversial and still unclear events of November 19th, 2005 in the Iraqi province of Al Anbar, and you have the rebirth of a filmmaker.

I'm no expert on the Haditha killings, but here is what I do know (if readers find any of this to be inaccurate, don't blow a fuse, let's talk about it in the comment section): an IED blew up a Marine vehicle killing one Marine and wounding two others; in retaliation, the Marines killed twenty-four Iraqis near homes adjacent to the site of the IED explosion; fifteen of the twenty-four Iraqis killed were known innocent civilians; the Marines tried to brush aside the incident with a press release saying shrapnel from the IED killed the civilians; it was discovered that the video evidence of this incident was provided by a man who had also made propaganda videos for Al Qaeda; since this occurred, all charges against the group of Marines have been dropped except for those against Staff Sergeant Frank Wuterich, who is still awaiting trial.

Anyone who has followed the story of the Haditha killings with the hope of obtaining a knowable conclusion to it all, understands the true complications and confusions surrounding the event. It seems, at this point, that a definite answer will forever be out of reach, and to his credit, Nick Broomfield respected that lack of clarity and made an honest, heartfelt drama dedicated to the lives affected by this emotionally-charged tragedy. 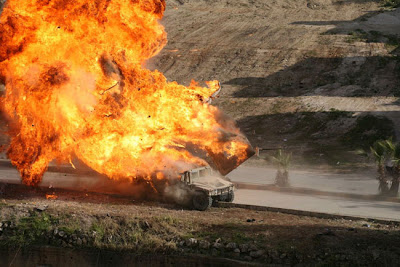 Since Broomfield knows as much as the rest of us about Haditha, he forgoes any personal agenda and turns his camera to the soldiers, the innocent civilians, and the terrorists who planted the IED. The characters are fictional, but parallels follow the various true accounts closely. The central figure is Corporal Ramirez, played by real-life former Marine Elliot Ruiz. I don't know if Ruiz had acting aspirations prior to Battle for Haditha, or if he has any now, but his presence is magnetic, his physical features riding the line between youth and manhood, nailing what Francis Ford Coppola hoped to evoke by casting a young Lawrence Fishburn in Apocalypse Now!

Doing a quick search on Ruiz, I found a fascinating interview with him on Defend Our Marines, a site set up with the goal of arguing in favor of the Marines charged in the Haditha killings. Here is an excerpt from that interview:

---
Defend Our Marines: You know, people, including me, are angry at you.

Elliot Ruiz: Yeah, I’ve been on DefendOurMarines.com. That’s why I wanted to do this interview. The thing is that nobody’s seen the movie yet. From the trailer what they see is a bunch of Marines killing all these innocent people. I want people to understand that this film isn’t trying to incriminate the Marines.

Defend Our Marines: But your portrayal of the shooting at the white taxi is cold-blooded murder. Your character shoots five Iraqis who have their hands in the air. In reality, the shooting at the white taxi was nothing like your portrayal. SSgt Wuterich was a good distance away: his line of sight was blocked, another Marine almost certainly fired the fatal shots. Forensics and testimony all tend to corroborate statements that the Iraqis were moving away from the car.

Elliot Ruiz: The film is definitely a fictional portrayal. At no point are we blaming the Marines for this. I wouldn't want to be part of something that gave the Marine Corps a bad name. I saw what the director, Nick Broomfield, was trying to do. Nick wasn’t trying to blame the Marines, Nick wasn’t trying to blame the Iraqis. And it wasn’t just a two-sided story, he also showed how the innocent Iraqis are caught in the middle between the military and the insurgents. So he’s actually showing three stories at once. (READ THE ENTIRE INTERVIEW HERE)
---
What's fascinating about this exchange is that both men share a professional closeness, yet they passionately disagree. I don't know if David Allender (aka Defend our Marines) ever served, but he is definitely pro-military. Ruiz obviously is too. Both men are "on the same side" yet they debate the portrayal of real-life events in Broomfield's film. Typically, in a discussion like this, we'd have two ideological opposites yelling at each other, getting everybody nowhere. Here, we have two experts, loyal to the Marines, respectful of the honor to all who have served, disagreeing on important details between the cracks. It's gray area disagreement between two like-minded people that we don't get enough of these days. For entertainment, the media wants two opposing firemouths (not intricacy), and hardcore ideologues on the left and right will exile you if you step out of line.
It's like Cpl. Ramirez says, "the Corps don't give a fuck about you, you gotta take care of yourself". We know Ramirez doesn't believe this, but we also sense that it's an emotion, born of frustration and fear, that every member of a combat unit in Iraq has likely experienced at one time or another. Broomfield nails this area of personal complexity that Kimberly Pierce ended up turning into goofy melodrama in Stop-Loss.
I hope people will see Battle for Haditha. It never made it to the big screen in my town. In a way, that makes sense. Most of us feel comfortable taking hard-line, black & white stances on the Iraq War and the greater War on Terror, so when a challenging film like Battle for Haditha or the excellent - and also barely seen - Grace Is Gone surfaces, audiences turn away because they only crave agreement from their entertainment. But what you think you know, you may not know, or you may just even - gasp! - change your mind. Remember what I used to think about Nick Broomfield?
By Dick Bennett - June 14, 2011

I have a aggregate concrete deck around my pool . Can I put cool decking over it? or can something else be done?

Really hot soapy water and a good outdoor stiff broom should do it. thru flow interlocking panels