Voices Against War by Lyn Smith

Voices Against War: A Century of Protest by Lyn Smith

On 15 February 2003, an estimated two million Britons took to the streets of London to protest against war in Iraq. Since the outbreak of that conflict, the anti-war movement has broadened and now has a global reach. Not all protesters would consider themselves pacifists - against all wars and violence - but whatever the basis of objection, their protest is part of one of the most enduring movements in history.

Based on nearly 200 personal testimonies from the Imperial War Museum Collections, this landmark book tells the stories of those who participated in protest - from the Great War of 1914–18, through to the Second World War, the Cold War and up to the present day, including the Falkland Islands invasion in the early 1980s, the first Gulf War in 1990–91 and the ongoing conflicts in Iraq and Afghanistan.

Voices Against War is a compelling, emotional and very moving human story, essential for understanding war in its entirety.
Erratum: p182, 5th/6th lines from top, 'non-violent action' should replace 'violent action'. With apologies from the author to Michael Randle.

Fighting for the right not to take up arms

VOICES AGAINST WAR: A CENTURY OF PROTEST BY LYN SMITH (Mainstream Publishing £19.99)


Rarely will the British people have commemorated a Remembrance Sunday quite so disillusioned with war and as sick of its death toll as this year.
That does not diminish the value of the lives sacrificed in the two world wars, but it raises the question - is war ever justifiable any more? So this collection of testimony by those who spoke out against wars, refused to fight in them and often suffered for it is particularly timely. The protests come mainly from the huge archive of recordings kept by, surprise, surprise, the Imperial War Museum, which rightly includes them as part of the story it has to tell. 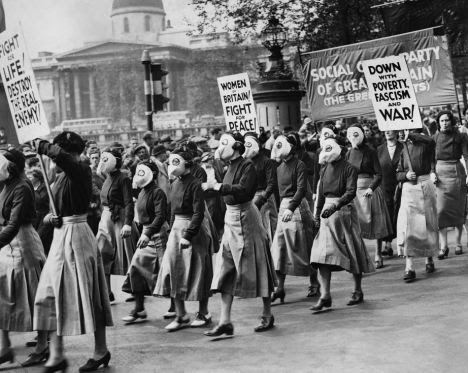 Anti-war Protesters In Trafalgar Square, 17 May 1936
Voices Against War ranges far beyond pure pacifism, the absolutist belief that war in any circumstances is wrong. Plenty of the voices quoted here belong to people who opposed fighting a particular war, for many reasons, political as well as religious.
Conscientious objection began with the institution of conscription in January 1916. By the Armistice, 16,000 objectors had faced tribunals, been branded as cowards, and the most uncompromising of them repeatedly imprisoned by court martial. Some of these were even sentenced to death. The sentence was then commuted to ten years' penal servitude.
They were the (often brave) pioneers. Gradually, it became tolerable that a man may sincerely heed his conscience.
In World War II, 60,000 men and 1,000 women were accepted as COs. They were less often reviled than their World War I predecessors and offered more useful work in hospitals, agriculture, or mining. Many did humanitarian service in such organisations as the Friends Ambulance Unit, or in bomb disposal.
But in 1940, faced with the threat of invasion, many reluctantly abandoned their pacifist objections on the grounds that Hitler must be stopped. One of them, Winnie-the-Pooh creator AA Milne, wrote: 'I believe war is a lesser evil than Hitlerism.'
And Tony Benn, already a convinced pacifist and admirer of Gandhi, joined the Home Guard at 16: 'If the Germans had arrived, I would have thrown a bomb.' All the same, COs were not exactly popular. They suffered disapproval or ostracism in the workplace or in public. At least one white feather was sent through the post - and to a woman 'conchie'.
After the war, the nuclear arms race meant that previous anti-war protesters mostly turned into anti-nuclear pacifists in the CND. Britain's H-bomb tests in 1957 triggered the Aldermaston marches. Later, the stationing of Cruise missiles at U.S. bases in Britain led to the all-woman camps at bases like Greenham Common.
CND failed to Ban the Bomb - instead, it proliferated. But it had an effect. 'People no longer thought of us as lunatics,' said one committee member. Anti-war movements might well have died out as a result of the ending of the Cold War but for the Bush doctrine of launching preventive wars whenever the U.S. deemed it necessary.
People watched Baghdad bombed in the first Gulf War on television, as if it were a video game, and it was all over too soon for much protest. 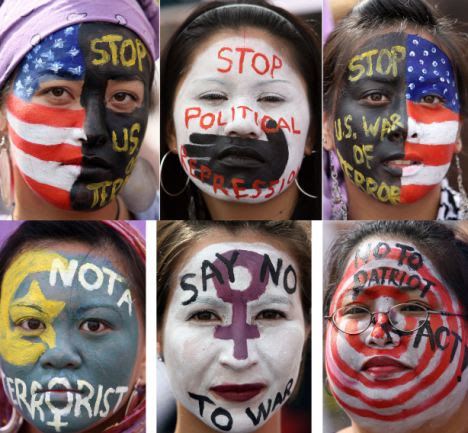 Anti-war demonstrators wearing face paint during a march against the war in Iraq in Los Angeles 27 October 2007.
But when it came to the second one, public sentiment had altered. February 15, 2003, produced the most massive anti-war protest ever seen in London. More than a million, some claim two million, marched, not only on Hyde Park, but in Glasgow, Belfast and other European capitals.
Admittedly, the object was to prevent a war not yet started. But it underlined the fact that all wars now are inflicted on civilians, who comprise 90 per cent of the casualties.
Nothing like such a sea of protesting civilians had been seen before in Britain's political history.
Organised by a Stop the War Coalition in partnership with CND and the Muslim Association of Britain, it attracted far more than the usual activists. Probably most of them had never marched or protested before.
What was their overriding motive? Not ideology, says Lyn Smith, but a mixture of anger and fear that ordinary, thoughtful people could be railroaded into war by politicians, despite the UN and the existence of alternative policies.
The legality of the most unpopular war in recent history is still to be investigated six years later. Nowadays, we are assured that the real purpose of wars is to change hearts and minds.
One of the most memorable quotations among many in this impressive collection is from Martin Bell: 'Wars have become more futile because you do not change people's minds with high explosives.'