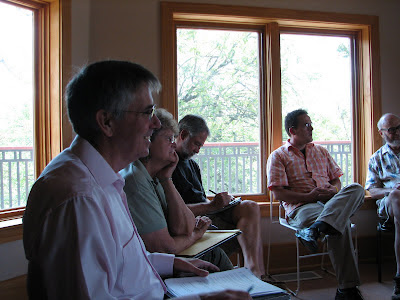 Robert McAfee (left) of Hackett, chairman of the climate change committee of the OMNI Center for Peace, Justice and Ecology, was appointed to the Arkansas Governor's Commission on Global Warming. He is shown chairing a meeting of the OMNI committee on global warming on August 30, 2007, at the Senior Activity Center library in Fayetteville, Arkansas.

The commission, created under Act 696 of 2007, consists of 21 members, 17 appointed by the governor and two each by the House speaker and Senate president pro tem. The law requires the commission to study global warming and recommend ways to address the problem.

The goals set by law for the commission include Reviewing scientific literature on global warming and the actions already taken by the federal government, evaluating levels of emission of greenhouse gas in Arkansas and whether reducing that would affect global warming, producing a “comprehensive strategic plan” to “place Arkansas in a position to help stabilize the global climate, to allow Arkansas to lead the nation in attracting clean and renewable energy industries to our state, and to reduce consumer energy dependence on current carbon-generating technologies and expenditures.” A report to the governor is to be by November 1, 2008.

"Global warming is a growing concern that requires study and action on both state and federal levels," Beebe said in a statement issued by his office. "This commission will give Arkansans our own perspective on the scope and potential impact of this phenomenon and recommend the best steps to take to protect ourselves, our environment and our economy for the future."

The governor also appointed Richard Ford of Little Rock, professor of economics at the University of Arkansas at Little Rock; Miles Goggans of Little Rock, a lobbyist for the agriculture and timber industries; Art Hobson of Fayetteville, professor emeritus of physics at the University of Arkansas; Kevan Inboden of Jonesboro, special projects administrator for Jonesboro City, Water & Light; Christopher Ladner of Little Rock, chairman of the Arkansas chapter of U.S. Green Building Council; and Robert McAffee of Hackett, a climatologist and executive director of The Peaceable Kingdom and Thinking Like a Mountain Institute.

The governor's other appointees are Elizabeth Martin of Fayetteville, research specialist for the University of Arkansas, who will represent the AFL-CIO; Pearlie Reed of Little Rock, legislative liaison for the National Association of Research, Conservation and Development Councils; Cindy Sagers of Fayetteville, associate professor of biological sciences at the University of Arkansas; Jeffrey Short of Malvern, who will represent the Arkansas Audubon Society; and Gary Voigt of Paron, president and CEO of Arkansas Electric Cooperative Corp.

Appointee Art Hobson said he was excited to be part of the commission and pleased with Beebe's choices.

"I'm really happy that the governor has appointed several scientists to this commission. To me, one of the most important things all along was that science be well represented," he said.

"With this commission, with the broad-based support it has, we really could be a leader (on the issue of global warming) in the next couple of years," appointee Robert McAffee said.

Bill Kopsky, executive director of the Arkansas Public Policy Panel, said the commission will benefit from being well-rounded, including among its members not only scientists and environmentalists but also representatives of industry.

"The business community is going to have to be a partner in solving this. It's a global problem," he said.

"I think we're going to achieve some really important, good solutions that the governor can take to the Legislature and get passed in 2009," said Glen Hooks, spokesman for the Sierra Club of Arkansas.

"This is a great step forward in us not doing business as usual," he said.
By aubunique - September 07, 2007