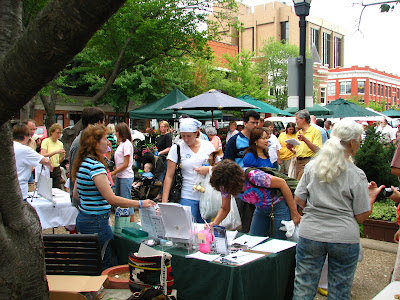 The OMNI Center for Peace, Justice and Ecology provides a volunteer-staffed table on the Fayetteville square each Saturday during the Farmer's Market season. People sign petitions on an array of popular issues, but impeachment has drawn much of the attention during the summer of 2007.
Please click on photo to enlarge.

THE MOVEMENT to IMPEACH President Bush originated in response to the
constitutional articles and federal laws he has broken.
Dave Lindorff and Barbara Olshansky's book, The Case for Impeachment: The Legal Argument for Removing President George W. Bush from Office (St. Martin's, 2006) sets forth six articles of impeachment .

Here is their summary: “On the merits, the articles of impeachment detailed in this book should be an open-and-shut case (we have deliberately limited ourselves to those issues where the crimes are clear and almost self-evident). The evidence of George W. Bush’s constitutional transgressions, violations of federal and international law, abuse of power, and criminal negligence as chief executive — all laid out in this volume — are so blatant one might think conviction would be a foregone conclusion.”

For similar reasons, the Center for Constitutional Rights gives four articles of impeachment in Articles of Impeachment against George W. Bush (Melville House, 2006). Again based upon the president violating the Constitution and breaking federal laws, Dennis Loo and Peter Phillips, editors of Impeach the President: The Case Ag ai nst Bush and Cheney (Seven Stories, 2006) summarize “12 Reasons Why George W. Bush and Richard Cheney Must Be Impeached” from the sixteen chapters in the book.

The most recent book on the Bush Administration’s offenses against Constitution and law is Cowboy Republic: Six Ways the Bush Gang Has Defied the Law by Marjorie Cohn. Cohn is a professor at Thomas Jefferson School of Law and president of the National Lawyers Guild.