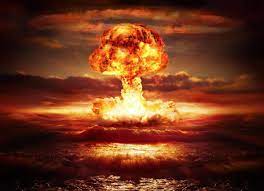 ARPBS, “Extinction: the Facts,” David Attenborough, Wednesday, March 31, 7.pm.  “With a million species at risk of extinction, Sir David Attenborough explores how this crisis of biodiversity has consequences for us all, threatening food and water security, undermining our ability to control our climate, and even putting us at greater risk of pandemic diseases.”

10 Ways that the Climate Crisis and Militarism are Intertwined.  - CodePink

https://www.codepink.org › 10_ways_that_the_climate...   By Medea Benjamin. The environmental justice movement that is surging globally is intentionally intersectional, showing how global warming is connected to US global war machine.

Diverse Coalition Calls on Congress to End 'Forever Wars' and 'Unaccountable, Interventionist' US Foreign Policy  by Jessica Corbett, staff writer.
Common Dreams (2-18-21).
A separate letter, signed by some of the same groups, lays out how the Biden administration can "end the cycle of endless war of the last two decades."

USA: VIOLENT NATION (from Abel Tomlinson soon after the murder of eight Asian women)
Not sure if you heard the following story. In a culture that still glorifies this, it's no wonder mass violence occurs so regularly.  In response to a comment I made about opposing racism-fueling warfare & USA nuking hundreds of thousands of Asian civilians, a friend of a friend wrote:
"My high school mascot is The Bombers with a mushroom cloud as the icon. There’s a B52 painted on the side of the school representing the plane that dropped the Nagasaki bomb. The plane’s name is “A Day’s Pay” because the workers at the Hanford power plant that built the bomb donated a workday’s pay to fund the plane.

There’s been a battle between those who are “Proud of the Cloud” and those who are fighting to change the mascot: “There’s no silver lining behind this cloud.”

We used to chant “Nuke ‘em till they glow!” at basketball games.

I feel really inspired to head a movement to change the mascot for good."