The costs of homeland security

Sep 8th 2011, 21:15 by N.B. | WASHINGTON, D.C.
IN APRIL, I wrote about a paper [PDF] from John Mueller (of Ohio State University) and Mark Stewart (of the University of Newcastle in Australia) that tried to judge whether the return on America's investment in homeland security after 9/11 justified its huge expenditures. Now Messrs Mueller and Stewart have turned their paper into a book, Terror, Security, and Money: Balancing the Risks, Benefits, and Costs of Homeland Security. On Wednesday, they published an excerpt in Slate. Here's the money quote, or, rather, chart: 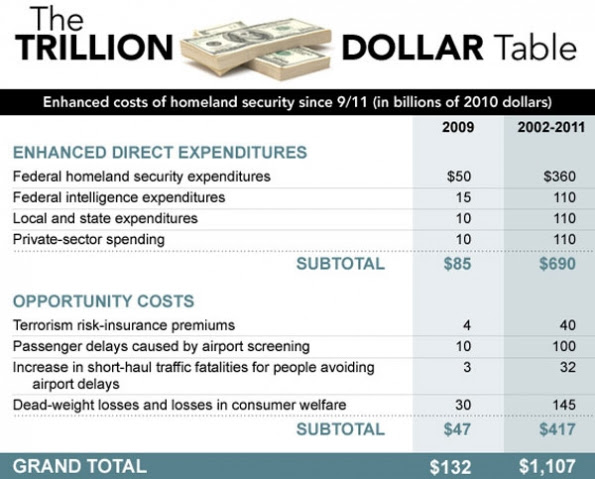 That's a lot of dough! Messrs Mueller and Stewart note that the 9/11 commission asked the government to apply standard cost-benefit accounting measures to its decision-making on security measures. Unfortunately, they write, "it appears that this simply has not been done." The problem is that terrorist attacks don't just have economic costs. They also (usually) kill people, and even those that don't cause deaths or massive damage can have far-reaching political consequences. Politicians are understandably reluctant to risk being blamed for a successful terrorist attack, and many people stand to make money from government security spending. That means that all but the most stupid and useless security measures (and some of those, too) are approved.
The researchers, to their credit, understand all this. They also don't think it matters:


Political and emotional conditions do supply an understandable excuse for expending money, but not a valid one, and they do not relieve officials of the responsibility of seeking to expend public funds wisely. It is particularly important to do so with homeland security expenditures. They deal not with bridges to nowhere or with crop subsidies, but with public safety—or domestic tranquillity—the central, fundamental reason for the existence of government in the first place. It is imperative that decisions be made sensibly and responsibly in this area. To be irrational with your own money may be to be foolhardy, to give in to guilty pleasure, or to wallow in caprice. But to be irrational with other people's money, particularly where public safety is the issue, is to be irresponsible, to betray an essential trust. In the end, it becomes a dereliction of duty that cannot be justified by political pressure, bureaucratic constraints, or emotional drives.

This is a good point, and I hope it gains traction. Bloggers Matt Yglesias and Kevin Drum have more on this and related issues.
By Dick Bennett - October 31, 2011