Please click on individual images to ENLARGE and display wider view of poet John Rule talking about OMNI Center's message of peace to visitors to the Farmer's Market in Fayetteville, Arkansas, on August 21, 2010. 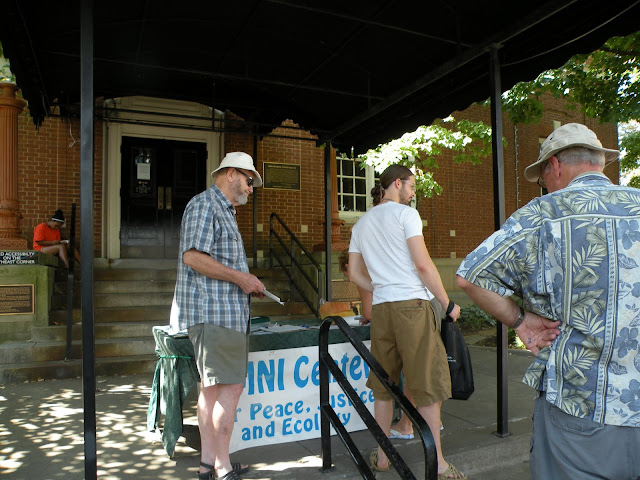 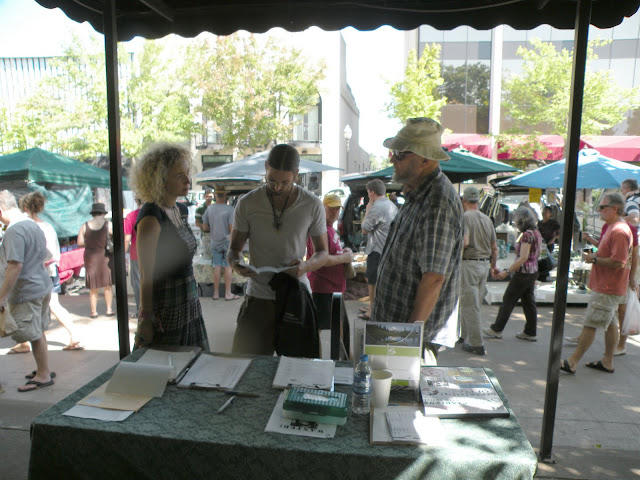 OMNI is tabling against WARS and WARMING Saturdays at the Farmer's Market.   Join us, help us make OMNI a presence there, speaking to the official aggression and public acceptance and silence.   Wear your OMNI shirt if you have one.   What follows is one strong voice against US foreign aggression:  Cindy Sheehan. Dick BennettMy blog:http://jamesrichardbennett.blogspot.com/jbennet@uark.edu(479) 442-46002582 Jimmie Ave.Fayetteville, AR 72703 cindyssoapbox@gmail.comCindy Sheehan's Soapbox Newsletter August 29, 2010
Greetings!
Hate War? Me too, and I have been fighting against the illegal and immoral wars of the US Empire since my son, Casey, was killed in Iraq in 2004.
Now, the Empire is telling us the war in Iraq has "ended" after dozens were killed in many separate instances of violence in Iraq over the past week.
It's time to work harder and smarter--not back down.
Love & Peace, Cindy
In This Issue WE HATE WAR WAR NOT OVER WE HAVE A DREAM WINNING, LOSING AND WAR REVOLUTION, A LOVE STORY CINDY SHEEHAN'S SOAPBOX RADIO SHOW
Today on Cindy's Soapbox, we play an interview that Cindy did with Scott Horton of Antiwar Radio.
The show will be available at the web site at 2pm (PST).www.CindySheehansSoapbox.comListen to this fabulous interview, or any in the archives!
DOZENS DEAD
IS THE IRAQ WAR REALLY OVER?
WE HAVE A DREAM
CLICK ON IMAGE TO VIEW SPEECH
Winning, Losing and War in NY Times
CLICK IMAGE TO READ REST OF ARTICLE
FROM AUGUST 29TH ARTICLE BY PETER BAKER:
And for those who have suffered deep loss, like the relatives of the 4,400 Americans or the many more Iraqis who died, the notion of victory or defeat can feel remote. "Well, first of all, my family lost in a big way," said Cindy Sheehan, who became perhaps the nation's most prominent antiwar activist after her son died in Iraq. "We had one of our cherished members, Casey, murdered by the U.S. empire in Iraq." In her view, "the only winners have been Halliburton, KBR, CACI, Xe, Unocal, BP, Standard Oil, Boeing" and other corporations that profited from the war. "People here in the U.S. who don't know that they lost have lost big time," she said.
"We have also come to this hallowed spot to remind America of the fierce urgency of Now. This is no time to engage in the luxury of cooling off or to take the tranquilizing drug of gradualism. Now is the time to make real the promises of democracy. Now is the time to rise from the dark and desolate valley of segregation to the sunlit path of racial justice. Now is the time to lift our nation from the quicksands of racial injustice to the solid rock of brotherhood. Now is the time to make justice a reality for all of God's children." (MLK JR, I Have a Dream Speech)
I, too, have a dream that people will come together to make Peace a Reality in our time.
Love & Peace
Cindy SheehanCindy Sheehan's Soapbox
Featured ArticleREVOLUTION, A LOVE STORY
Revolution, A Love Story is a documentary by Cindy Sheehan and Joshua Smith that strives to dispel the demonization of Hugo Chavez and Venezuela by telling the inspiring story of the People's Revolution in Venezuela.
Click on the Image to pre-order the documentary.
(The movie should be ready by the end of September and will premiere at the Grand Lake Theatre in Oakland on September 29)
WAR IS A RACKET BY MAJ. GEN. SMEDLEY BUTLER
ORDER YOUR COPY OF THE 75TH ANNIVERSARY EDITION OF WAR IS A RACKET BY MAJOR GENERAL SMEDLEY BUTLER WITH NEW FOREWORD BY CINDY SHEEHAN (SIGNED BY CINDY)
This booklet is a re-print of a famous speech and treatise given by the most highly decorated Marine warrior of his time as he reflected on being a "strongman" for the corporations.
This booklet needs to get into the hands of every parent and teen/young adult in this country. You can help make that happen for only $10 (includes shipping and handling).
We have discounts for bulk orders, teachers, and students. Please contact: josh@peaceoftheaction.org for more info on discounts.
Cindy Sheehan's Soapbox and Peace of the Action are also reserving 535 copied to deliver to the 112th Congress when it convenes on January 3rd, 2011 (more info on that soon) and your order will help us get there!
By aubunique - August 29, 2010