Come to the membership meeting to talk about such things as the story below or any other issue related to peace, justice, ecology and even equality

Please click on image to ENLARGE to read poster. 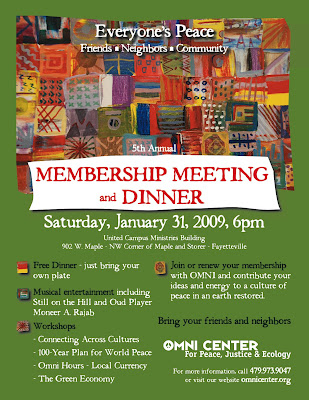 "Member Criticizes Global Warming Commission"
By John Lyon
THE MORNING NEWS
http://www.nwaonline.net/articles/2009/01/14/legislature/011509lrlegglblwrm.prt
LITTLE ROCK -- A member of the state Governor's Commission on Global Warming told lawmakers Wednesday they should be skeptical of the panel's recommendations for combating climate change.
Richard Ford, a professor of economics at the University of Arkansas at Little Rock, spoke at an informal meeting requested by Sen. Percy Malone, D-Arkadelphia, former Senate chairman of the Joint Committee on Energy.
"I don't think we followed the law as given," Ford said.
Ford said the 2007 law that created the commission directed the body to "study the scientific data, literature and research on global warming to determine whether global warming is an immediate threat to the citizens in the state of Arkansas." He said that never happened.
"It was implicitly assumed that global warming is a pending catastrophe, that it had to be addressed, basically by limiting (carbon) emissions," he said.
The commission presented to the governor late last year a report containing 54 recommendations for reducing the state's contributions to climate change, including a moratorium on new coal-fired power plants until pollution-control technology improves.
"I would ask you to be skeptical of many of the recommendations -- most of them," Ford said. "Be skeptical of the cost numbers. I several times pointed out that they were estimates on the low side because they just flat did not include everything."
The commission's report includes analysis of the costs to implement 29 of its recommendations. It estimates the net cost at $3.7 billion between 2009 and 2025.
Lawmakers also heard presentations by others with skeptical views of global warming.
Art Hobson, professor emeritus of physics at the University of Arkansas in Fayetteville and also a commission member, said in an interview Wednesday he believed the commission did follow the law.
Hobson noted the title of the legislation creating the commission states in part that its purpose is "to establish a global warming pollution reduction goal and comprehensive strategic plan."
"It didn't seem to me that we were really directed to study the underlying science," Hobson said, though he said as a scientist he would have been happy to discuss the scientific evidence of global warming.
Hobson also said he disagreed with Ford's assertion that the commission's cost estimates were inadequate.
"A lot of these policy options that we recommended would save money for Arkansas, and some would cost money. Those were very carefully worked out by CCS (the Center for Climate Strategies)," he said.
CCS, a nonprofit group based in Harrisburg, Pa., provided consulting services to the commission while it was preparing its report. Hobson said he has heard complaints that the group "roped Arkansas into doing this and into hiring CCS," but he said in fact it was the other way around.
"The commission was appointed, and then we looked around at each other and said, 'Well, what do we do now? How are we going to develop these ideas?' Then some of the people who were supporting the idea of the commission looked around and found CCS," he said.
Malone said he had hoped Ford and the other speakers could address an official meeting of the Joint Committee on Energy, but the scheduling of Wednesday's meeting conflicted with committee rules, so an informal meeting was held instead.
Malone encouraged people with other points of view to contact the committee's new Senate chairman, Sen. Kim Hendren, R-Gravette, and ask to make a presentation.
By aubunique - January 14, 2009