Please click on image to enlarge view of Mayor Lioneld Jordan quoting President Abraham Lincoln in support of human equality before the Citizens of NWA Against Racial Profiling on Dickson Street's walk down Dickson Street to protest discrimination. Members of the OMNI Center for Peace, Justice and Ecology walked in support of the anti-discrimination effort. Please see story below from the Northwest Arkansas Times for Saturday, February 21, 2009, for more information about the issue.
Northwest Arkansas Times 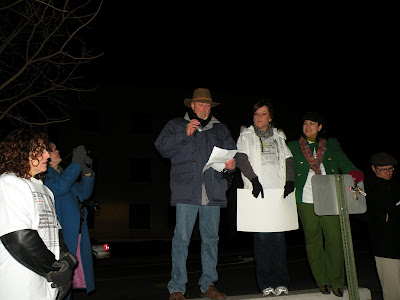 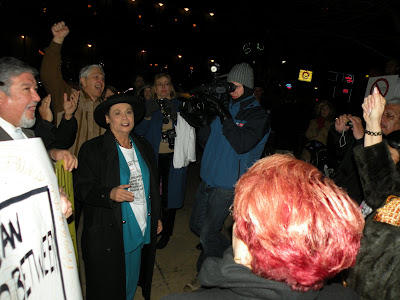 Allegations of racial discrimination on Dickson Street have prompted one local group to take a stand.
Members of the online Facebook group, Citizens of NWA Against Racial Profiling on Dickson Street, plan to raise awareness this weekend by taking part in the African American Heritage Walk at 7 p.m. today.
The walk will start at the St. Paul's Episcopal Church parking lot on Dickson Street and will end at the front of the Walton Arts Center.
"It's a way to celebrate African-American heritage achievements in Northwest Arkansas and to bring attention to issues like racial profiling," said Corbin Blake, who helped create the online group. "We want this to be a peaceful awareness type of event. We don't want to overstep our boundaries - we're just out to try and help the situation."
Since joining the group several weeks ago, Blake said membership numbers have continued to skyrocket.
The site, which can be access by visiting www. facebook.com/group. php?gid=61630505119, features an open forum where members can share their thoughts, ideas and experiences.
"We started the Facebook page to try and collect as many stories as we can from people," Blake said. "It's pretty powerful right now. Last week we had 200 members and this week we have over 700."
Site administrator Lesleigh Creel said the group's popularity has prompted numerous residents to come forward with their own stories of racial discrimination. Blake said tonight's walk aims at furthering the group's awareness initiative through community education. Instances of racial dis- crimination on Dickson Street, he said, have become an all-too-common experience.
"I didn't realize it was so prevalent," he said. "I've experienced a couple things personally and have heard the same stories from a lot of other people. We just feel like this has gone on long enough and someone needs to be held accountable."
Though he admits that instances of racial discrimination aren't a common experience at every bar, Blake said most stories have centered around two Dickson Street bars owned by David Bass.
Bouncers at both Shotz and Stir, he said, have been accused of selective policy enforcement.
"There have been times when I've been asked to remove my hat, while other, white people in the bar didn't have to," Blake said. "I've also been told that my pants are too baggy but have seen other, white people with clothes a lot baggier than mine."
According to a sign posted on the window of Stir, the club prohibits customers from wearing sunglasses, hair net, hats, baggy clothing, jerseys, hoodies, towels and or chains.
Willy D's Piano Bar has a similar sign prohibiting the same items, in addition to tank tops, sweats, medallions, oversized T-shirts, bandanas, cut-off sleeves, skull caps or beanies. The policy also bans hats from being worn sideways.
"The dress code isn't a problem for me," Blake said. "They have the right to enforce their own policies. What bothers me is when they apply them to whoever they choose."
Blake said group members attempted to contact Bass to no avail.
"We feel like it's a slap in the face," he said. "We were taking the stance that maybe he didn't know this was going on, but he hasn't returned any correspondence with us or the mayor in about a month. We'd just like to talk to him."
As of Friday, Bass said he didn't plan on contacting the group.
"There's no discussion here," he said. "Any allegations of racial profiling are absolutely untrue. The inference that such statements are being made is extremely disappointing and unfortunate."
Bass described most of the allegations against the business as "hearsay."
"Anytime you're in the club business, you'll have a lot of gossip and water cooler talk," he said. "The fact of the matter is that we, like any other business, have a policy set in place that we will enforce and abide by. If you don't meet the conduct or dress code, regardless of race, creed, nationality or age, you won't be welcome nor should you be at any other business."
"If you conduct yourself in a professional manner, then you're welcome here," he said.
In addition to starting a Web page and hosting awareness events, members of the anti-racism group have submitted letters to the mayor, the police chief, local media and business owners to address the issue.
"We haven't received any complaints about racial profiling, other than the letter that was sent out," Fayetteville Police Chief Greg Tabor said. "It's against the law for a business to discriminates against someone based on age, race, gender or religion. It's not a criminal offense, but it is something that could be pursued civilly."
The letter, which can be accessed by visiting the group's Facebook page, asks that Fayetteville Mayor Lioneld Jordan take a stand by publicly addressing the issue.
Calls made to Jordan weren't returned Thursday or Friday.
Copyright © 2001-2009 Arkansas Democrat-Gazette, Inc. All rights reserved. Contact: webmaster@nwanews.com
By aubunique - February 21, 2009