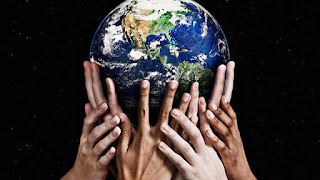 Why Doesn’t US Public Education Tell the Truth About Warming?

Harry Vandergriff, when he was Superintendent of the Fayetteville Public Schools, wrote a letter to the parents informing them of the dismissal of classes for Business Education Day.   The event was sponsored by that great institution for critical thinking, the Public Schools/Chamber of Commerce complex.  “The purpose of Business Education Day is to give the teaching staff of the schools a better understanding of the business community.  They will visit with various business and industrial plants…and receive information concerning the operation….This visit should increase the teachers’ knowledge of and concern for the various companies of this community and assist them in the teaching of their students.”

I’d like to give two citizens a crack at the public schools’ chumminess with the ruling economic system (the early twentieth-century syntax can’t hurt but just might cause us to pause and think).

“The place in men’s esteem once filled by church and state is now held by pecuniary traffic, business enterprise.  So that the graver issues of academic policy which now tax the discretion of the directive powers, reduce themselves, In the main, to a question between the claims of science and scholarship on the one hand and those of business principles and pecuniary gain on the other.”

Next Jack London, writing about “the capitalistic bias of the universities and common schools” in The Iron Heel.

“It was a logical and crushing indictment of the whole system of education that developed in the minds of the students only such ideas as were favorable to the capitalistic regime, to the exclusion of all ideas that were inimical and subversive.”

How do Veblen and London relate to the climate calamity and the Green New Deal?

For the past 40 years we have witnessed the decline of the New Deal and the rise by 2016 of the now far-right Republican Party to control the White House, Congress, and the Supreme Court.  What else has been happening during this time period as the direct result of the neo-liberal economic system exalted by that Party?   Military spending has continued to increase while taxes have continued to decrease for the wealthy.  And the planet’s atmosphere has heated and absorbed moisture so much that our civilization is imperiled, yet the temperature continues to rise.

Be active politically.  Support candidates for office who meaningfully oppose the continued rise in global temperature. Check out the Green New Deal.